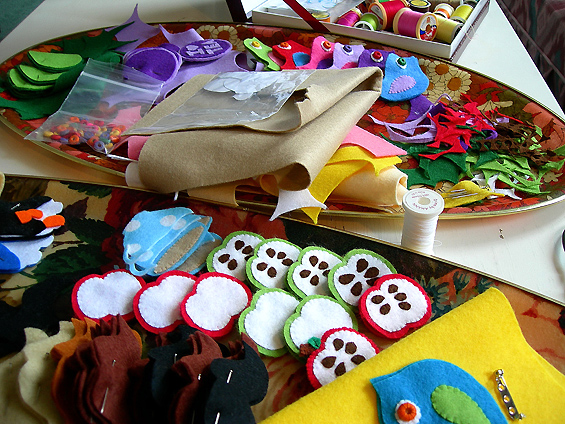 Creative thinking is essential if you have serious designs on success.

One door may have closed on Ger Collins and Eva Esteve’s first foray into the craft sector yet a window of opportunity has opened too.

The friends opened Pippablue, a crafting supplies and giftware shop, in Galway city centre, six years ago. Two years ago it closed.

“Slowly but surely over the course of the recession, our sales dwindled to a point where we could no longer sustain it,” said Collins.

The pair, who are stitching experts, took the business online, making and selling handmade, personalised baby blankets. While that business is thriving, “we realised very quickly that we couldn’t scale up because there’s no scope for wholesaling,” said Collins.

Their shop had, however, sowed the seeds for an even greater business opportunity, one which, all going well, could dwarf all their efforts so far.

“In the shop our best sellers were sewing kits for kids and adults,” said Collins. “These kits included patterns, textiles, threads and instructions and were a particularly popular children’s gift. Yet we always felt we could have done a better job of the kits than the ones we were selling.”

They spent the past year working with graphic designers and printers to develop their own range of sewing kits, stuffed animals and dolls, which they will launch this month at Showcase, the international design and crafts trade show at the RDS in Dublin.

The venture is one of 90 Local Enterprise Office-supported craft businesses participating in the show’s Enterprise Zone. Having undertaken a business development course specifically designed for craft firms at Galway LEO, Collins is optimistic for the venture’s future.

“Scalability is always the hardest thing for any craft-based business to crack but we think we have done it,” he said.

“Our aim now is to grow this into a large-scale production business. Meeting the buyers at Showcase will give us a good idea of the kind of interest there is for our product at home and internationally.”

Showcase, billed as Ireland’s Creative Expo, takes place from January 18-21 and is expected to attract more than 5,000 trade buyers from 27 countries.

This year’s Showcase is the first international trade event taking place as part of Irish Design 2015 (ID2015), a government initiative included in the Action Plan for Jobs, aimed at promoting Irish design at home and abroad with a view to driving job creation and exports.

The year-long programme, which includes more than 300 Irish and international events, aims to create 1,800 jobs over the next three years in the craft and design sector, generate an additional €10m in exports and create more than 200 new design-led business start-ups.

Showcase provides buyers with a unique opportunity to meet and trade with hundreds of Irish designers and entrepreneurs over an intensive four-day period.

It can generate up to €20m in sales orders, according to Karen Hennessy, chief executive of the Design & Crafts Council of Ireland.

“Thanks to Enterprise Ireland’s promotion of Showcase abroad, the show continues to attract buyers from around the world whose investment is vital for small- and medium-sized enterprises keen to break into export markets or expand their existing international presence,” she said.

This year there will be a 10% increase in exhibitor numbers, with more than 460 designers, manufacturers and craftspeople presenting their latest products.

While comprehensive figures are being compiled by the council, Hennessy estimates that about 60,000 people are employed in the design and craft sector. The latter is estimated to be worth €500m to the economy, with graphic design, which is just one element of the design industry, worth the same again.

The challenges faced by businesses in craft or design are similar, she said. “A lot of designers also work in small businesses and scaling up is also an issue,” said Hennessy.

“Part of ID2015 is showing the value design can bring to any product or business, showcasing how design can provide a significant unique selling point for any business.”

While the recession took a toll on the craft sector, hit by the collapse of consumer spending and the closure of many craft and giftware shops, it is robust, added Hennessy.

“It’s a very dynamic sector whose businesses tend not to have the same costs or overheads as other businesses, and are also by their nature very agile.” A legacy of recession has been a renewed interest in buying local. “The aim now is to make sure that, as the upturn takes place, that sense of the importance of buying local remains,” she said.

Laura Gault will this year attend her fifth Showcase. Typically the orders she takes at it keep the Sligo potter going for the rest of the year. “The last Showcase I attended was in 2012 and I took so many orders at it that I had to work until 10pm almost every night for a year to make sure I fulfilled them,” said Gault.

She avoided Showcase for the past two years in order to focus on her new baby, relying solely on her studio shop in Sligo for income. “I’m going back to get sales and to keep my name out there among buyers.

“Basically, if you don’t do the show, you don’t get the orders. The only alternative to it is to go out knocking on doors.”

Her aim now is to grow the business to a point where she can employ staff to help with production, leaving her free to concentrate on design. “When you’re too busy making you can’t design,” she said.

Simply showing up is not enough to win sales, however, according to Eibhlin Curley, a crafts expert with Dublin LEO.

Typically buyers are looking for products that are new and innovative. “You also need to be able to provide the back story behind the products, something that makes them more personal,” said Curley.

“Otherwise they know the consumer could simply go down the road to Ikea and buy a piece something similar for a fraction of the price instead.” The typical retail markup in crafts is a multiple of 2.7, meaning the producer charges €10 for a piece and the retailer charges €27.

One of the biggest challenges facing craft makers is the prevalence of “sale or return” orders, whereby the retailer only pays for those goods it sells. “It only happens in the craft sector and it’s a killer for the producer but in the early days people are often so desperate to make a sale they feel they have no choice,” she said.

One of the best ways to build sales is to create collections. “It’s like a jeweller creating a necklace and then following it up with matching earrings,” added Curley. “What you want is to ensure collectors are a large part of your customer base, people who will come back to you.”

Dubliner Paula Byrne, who gave up her job as an MTV television producer to produce wall hangings, is hoping Showcase’s Enterprise Zone will help her make the transition from the one-off commissions to the wholesaling of textile prints.

This could increase her earning capacity and free her up to concentrate on design. This is important given that her next design project is one with global potential.

Byrne, who has a particular interest “in the space where textiles and technology meet”, is working on the creation of a textile bird which “chirps” via a smartphone when someone wants to get in touch with the owner.

It would, she believes, be popular for families with members living overseas and who typically get together via Skype or FaceTime.

“It has given me confidence to realise craft and design is something I can do for real, not just as a hobby, which is what it always was to me growing up.”