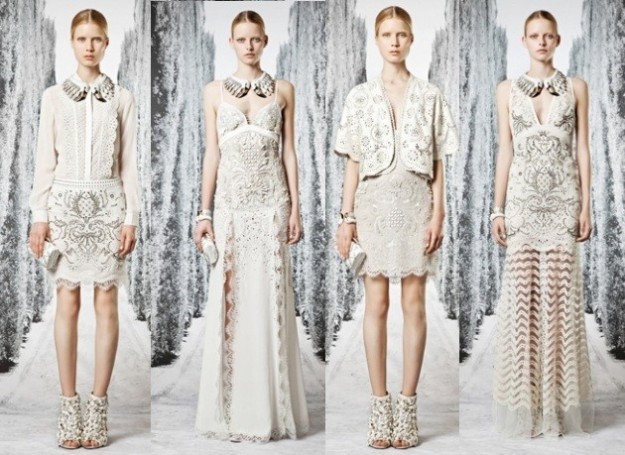 Hooked on a classic, yet again

Don’t tuck away that tea cosy just yet — you might need it for a summer hat. Crochet, once the preserve of low country kitchens, has taken its place in high fashion. It has been there before, of course: Seventies stars such as Lauren Hutton loved their crocheted mini-dresses. But now, as shown in T2 today, designers from Prada and Calvin Klein to Louis Vuitton and Chanel are “hooking” their customers. When Oscar de la Renta, couturier to the smartest set on both sides of the Atlantic, decides that white crochet dresses are the thing for spring, you know “naivety” is in. Knitting is nice, after all, but crochet is lacier, looser, lazier-looking, loopy. It is more suggestive. And more mysterious.

The origins of crocheting are unclear. The word itself comes from croc, or croche, the Middle French word for hook (the Norse word is krokr), but the skill may have originated in Arabia or South America, or, most likely, from Chinese needlework, which reached Europe in the 1700s.

It has been known in Italy as “nun’s work” and in France as tambour, a past-time involving a drum-like support and evolved into something called “crochet in the air”, when the background fabric was discarded and the stitching done on its own. The fashionable lace-like crochet of today threads back to that. It is slightly finer and seems more sophisticated, but is no easier to wear. While evocative of childhood sewing, it is, to put it simply, transparent. Best to dress beds and sofas with it, not one’s own body. Or, for real retro-chic, use it to decorate hanging plantholders. And feel free to give your tea pot the de la Renta treatment. But it won’t keep you cosy.