Home > Sewing > I’m far from wealthy, but I reap what I sew 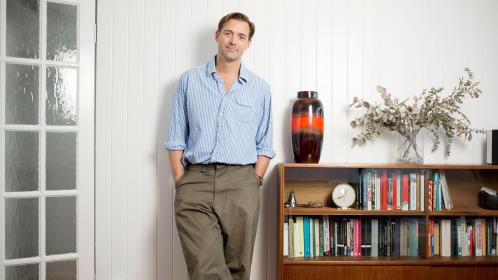 The tailor and TV personality Patrick Grant considered architecture and gardening before stitching together an empire on Savile Row.

The tailors of Savile Row, who have dressed everyone from Winston Churchill to Prince Charles, might be expected to dine on grouse or oysters. But the designer Patrick Grant lived on frankfurters and discount pitta bread while building up his business in the home of bespoke tailoring in Mayfair.

Grant, who is also a judge on BBC2’s Great British Sewing Bee, says he had a lunch budget of £1 a day for five years while expanding Norton & Sons, the bespoke tailor he bought when it was on the brink of failure.

After growing up in Edinburgh, he studied materials science and engineering at Leeds University.

He worked in marketing at three different companies in his twenties before going to Oxford to do an MBA in 2004, when he was 32.

A year later, Grant used the proceeds of selling his home in Liverpool and mortgaging a second property in Oxford to take over and rejuvenate Norton & Sons, which is still based on Savile Row.

In 2009, he relaunched E Tautz & Sons, a ready-to-wear label, for which he won the menswear designer honour at the British Fashion Awards a year later. He is also behind the menswear line Hammond & Co, which is sold at Debenhams.

Grant appears in the Sewing Bee alongside the presenter and Sunday Times Style columnist Claudia Winkleman. The fourth edition of the series, which aims to find Britain’s best amateur sewer, was broadcast earlier this year.

How much money do you have in your wallet?
I don’t normally carry cash. There is €15 from when I was abroad [about three weeks ago]. Obviously €15 today is worth about 500 quid, so that’s quite a lot.

What credit cards do you use?
None, because I’m a Scot and I like to live within my means. I haven’t had one for about 10 years. I use debit cards.

Are you a saver or a spender?
At the moment, I’m neither. I am very lucky that the thing I used to spend most money on — clothes — I no longer have to pay for. I wear Norton & Sons, E Tautz or Hammond & Co.

The only other thing I spend on is bicycle paraphernalia.

How much did you earn last year?
About £48,000. I pay myself a salary to cover basic living costs in London, which are quite expensive.

Have you ever been really hard up?
I’m kind of hard up almost all the time. When you start your own business — unless you’re extraordinarily fortunate, or extraordinarily talented, and I’m neither of those — you have to be prepared to pay yourself last and live on dust for the first four to five years. I gave myself a lunch budget of £1 a day.

What can you get for £1 a day?
It’s amazing what you can get. Sainsbury’s used to do two-for-one packs of six pitta breads, so you could get 12 of those for about 80p. A pack of 10 frankfurters, on special offer, would be a treat, or I could have a hard-boiled egg.

In the first three years at Norton & Sons, I paid myself a total of £21,000. I had just spent two years at university, where I got used to not spending money. Previously, I had a good salary and spent what I earned, but student life stood me in good stead.

We started the business with very little in the bank and now we reinvest what we earn. The most important thing is seeing the business flourish.

Do you own a property?
I am renting a two-bedroom terraced townhouse in Gipsy Hill. I would like to buy at some point, but everything at the moment is going back into the business.

What was your first job?
My dad, James, worked as an accountant for RMJM, a big firm of architects in Edinburgh, and my first job was archiving all the old architectural drawings there. I was 16.

What has been your most lucrative work?
In terms of what I’ve been paid most an hour? The best job I had in that sense was working in marketing for Bookham Technology, where I earned just under £80,000.

I then wanted to expand my horizons so I went to night school to do A-level art and got a place to study architecture, but I changed my mind about that.

I spent some time thinking I might become a gardener, so I volunteered for the National Trust and spent weeks working in their properties before coming across a piece in the newspaper about MBAs.

Are you better off than your parents?
Probably. I own most of Norton & Sons, which includes E Tautz and Hammond & Co, so I think my assets are more substantial, and my parents are retired so they are not earning anything apart from their pensions. My mother, Susan, was the senior administrator of the graduate school of social science at Edinburgh University.

Do you invest in shares?
Only in my own company.

What’s better for retirement — property or pension?
I haven’t really thought about retirement. I had pensions in previous companies as well as my current one — what they’re worth, I couldn’t tell you.

When did you first feel wealthy?
I don’t, and I am not that interested in it, if I’m honest. I don’t need a lot of money to enjoy my life, partly because the fashion industry is always providing free dinners and parties.

I get invited to do all sorts of interesting things, I travel a lot with work and, outside of that, I like cycling in the mountains, camping and playing board games. That doesn’t cost very much.

What is it like working with Claudia Winkleman?
It’s hilarious and challenging at the same time — and she always beats me at Boggle.

I am huge fan of Strictly Come Dancing [which Winkleman co-presents] but I wouldn’t like to take part — it’s too nerve-racking. I have a friend, Laura Whitmore, who is doing it this year. Just watching it, I was terrified.

What has been your best investment?
Norton & Sons — it was a tiny business, almost on the brink of bankruptcy,
and now we have grown to a group of five businesses with a substantial combined turnover.

I have had 11 years of enormous satisfaction and enjoyment out of doing it. When I bought the company, I sold my house in Liverpool and mortgaged the second one, in Oxford, to fund the business.

And the worst?
We have had ups and downs. We bought a clothing factory in Blackburn last year. I thought I could turn it around very quickly, but I couldn’t, so we have lost a bit of money on that.

What’s the most extravagant thing you’ve ever bought?
I guess it’s all relative. I bought a couple of prints by Tracey Emin and other works of art I could only just afford at the time.

What’s your money weakness?
I like to buy good things and keep them — even as a kid I liked saving up and buying one nice thing. About 15 years ago I bought a secondhand road bike for about £1,500, although if I’d got it new it would have been about £3,500.

What aspect of the tax system would you change?
I don’t feel I am unduly penalised, but, generally, if you penalise people too heavily they will stop doing the thing you are taxing them for, or bugger off and live somewhere else.

Do you support any charities?
I have done a number of things over the years for Children in Need and I have a direct debit with Cancer Research. I am also a regular contributor to New College [Oxford].

What’s the most important lesson you have learnt about money?
My grandfather died in the war and, for some reason, my grandmother did not get a war widow’s pension and brought up two kids on a very limited income, so my mum was careful with money and I was brought up the same way. We treat it with great respect.