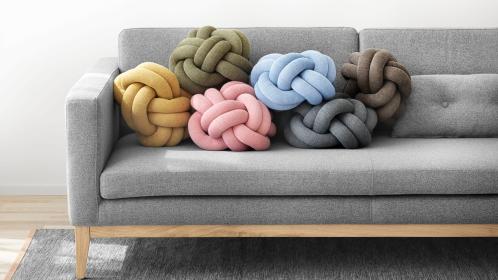 Crafty designers are showing that there’s more to wool than knitted throws — creating everything from art to chairs.

Wool is one of Nature’s most high-tech inventions. It is moisture-proof, fire-retardant, it can be recycled and is bio-degradable and yet, historically, the design world has been downright uninventive with it. There are great woollen mills in Ireland, including Foxford, Mourne Textiles and Molloy & Sons, which churn out woollen designs annually, but few makers venture beyond cushions, throws and apparel: beautiful, but hardly mould-breaking.

That’s changing. A move towards giant chunky knits and felted wool has shown how versatile this material can be in the home. These days, it’s not uncommon to see lighting and furniture made almost entirely of wool, and it’s the British and Scandinavians who lead the way. Last month in the UK, Wool Week, led by the Campaign for Wool, showcased everything from woollen artworks, by Jessica Dance and Jessica Wheeler, to knitted standard lamps and seating upholstery by Melanie Porter.

Janie Knitted Textiles uses British wool, a material not known for its softness, but celebrated for its durability, to make the Fan Pendant, where thick threads of yarn have been dip-dyed to form unique, striking woollen geometric light pendants.

Softheads, a company milking the tail end of the animal heads trend, produces beautiful tweed versions of trophy taxidermy, in the form of several breeds of dog, bulls, horses and even felted wool flying swallows, from €100. The Wool & Air armchair by Malafor, meanwhile, is a celebration of felt in its purest form: inflatable airbags are upholstered in felt and encased in a simple metal frame to form the most rudimentary, and yet oddly luxurious, chairs.

At home, Claire-Anne O’Brien, Irish born but British trained, pioneered creative ways with wool, when her knotted wool-topped stools were the star of the design trade fairs for several years. O’Brien was unable to keep up with production herself until Gan, the textiles outlet of global design firm Gandia Blasco, licensed her designs for mass production. The stools can now be bought online, and are serious investment pieces, at €580.80.

O’Brien has also collaborated with Ceadogan, the contemporary Irish rugmaker known for its limited edition pieces, to produce the Teadra II rug, gun-tufted with 100% felted wool, at €3,150.