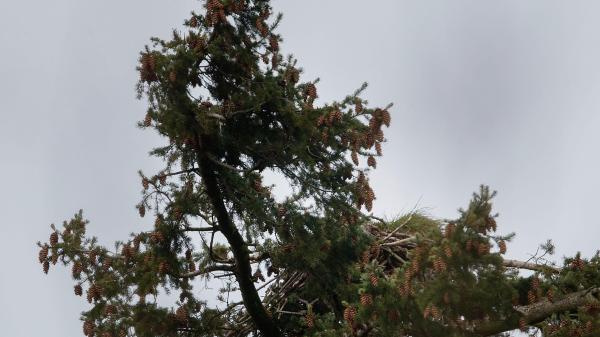 An osprey’s nest has been blamed for the cancellation next year of one of Britain’s biggest music festivals.

Organisers of T in the Park, a highlight of the Scottish summer for thousands of fans, said that planning constraints imposed because of the nest meant the site at Strathallan Castle in Perthshire was “simply not workable”.

However, wildlife groups insisted that the festival could go ahead. The breeding success of the ospreys, despite a summer soundtrack of rock music over the past two years, “illustrates how nature and development can often successfully coexist”, RSPB Scotland claimed.

The Scottish government said it would seek to reclaim £50,000, a third of the public funds it had granted to the organisers to ease the move from a former site.

T in the Park attracts about 85,000 fans and is the biggest music event in Scotland, second in size only to Glastonbury in the UK.

For 18 years the festival was held at Balado, near Kinross, but safety concerns surrounding an underground pipeline forced its relocation to the country estate at Strathallan last year.

Problems descended when a pair of rare and protected ospreys returned from migration in spring last year to a nest in a Douglas fir directly above the planned site of the main stage.

For a week it was unclear whether the birds would make their home in the tree and DF Concerts, the organisers, hired a professional nest builder to provide an alternative in a Norwegian spruce, 350m away.

But when two ornithologists and a policeman watched the birds mating on the original nest, it was clear the birds had made their choice.

Ospreys are protected and under the terms of the Wildlife and Countryside Act 1981 anyone who disturbs a nest faces the possibility of a £5,000 fine or a six-month prison sentence.

Organisers reconfigured their plans and pressed on with a three-day festival that became a public relations disaster.

Traffic management proved inadequate, resulting in long queues through the night as music fans tried to leave the site, about an hour’s drive from Glasgow and Edinburgh. Ironically, Noel Gallagher’s High Flying Birds were top of the bill.

Yesterday DF Concerts laid most of the blame on the birds, saving some scorn for the SNP administration at Holyrood.

“As the build-up to the festival was well under way we were informed by Scottish government ministers that we would have to apply for full planning permission due to the presence of an unregistered, but protected in law, osprey’s nest,” the company said in a statement. “The constraints — logistically and financially — that the resulting planning conditions put upon us are simply not workable.”

But many of the problems at T in the Park, had nothing to do with the birds. A report for Perth and Kinross council published in January this year found that festivalgoers last year had complained of insufficient stewarding, inadequate bag searches at the entrance and too few security staff on site; there were reports of widespread drunkenness and drug-taking. This summer two people died at the event before any acts took to the stage. Peter MacCallum and Megan Bell, both 17, died on the campsite in what were reportedly drug-related incidents.

Police also launched a rape investigation at this year’s festival following an attack on an 18-year-old, while a cash machine containing what officers described as a significant amount of money was stolen from the main arena.

The Scottish government awarded T in the Park £150,000 to assist its move from Balado to Strathallan.

In a statement, the government said: “We hope the organisers can address some of the challenges they have encountered recently to allow the festival to return in the near future.”

A spokesman added it would be seeking the repayment of £50,000 from T in the Park since the award of public funds was made to cover a three-year deal to hold the festival at Strathallan.

Given the ospreys’ breeding habits, and their commitment to the same nest site over many years, T in the Park is unlikely to return to the estate in 2018.

A festival source confirmed that DF Concerts hopes to mount a large-scale music event next year.