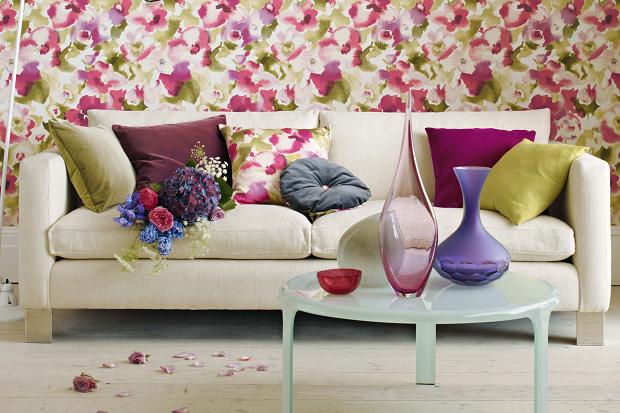 Like it or loathe it, the wallpaper and fabric company Sanderson has been brightening up Britain’s homes for 150 years.

You may think that a historic furnishings brand that produces quintessential English designs would be happy to be described as traditional — but not Sanderson.

“We would not say we were traditional,” says Alison Keane, the company’s PR manager. “Our style is classic contemporary.”

Founded by Arthur Sanderson in 1860, the wallpaper and fabric company is synonymous with feminine florals, the country-house look and classic sets. They may not be to everyone’s tastes, but Sanderson’s designs have always reflected contemporary style. The company has played a huge part in the major European decorative arts movements, from Arts and Crafts to Pop Art. It has worked with many famous designers, including Charles Voysey and Zandra Rhodes. It is this ability to adapt that has been key to its survival: the company is the oldest brand in its field.

More recently it has become known for retro and vintage patterns. In 2009 Sanderson launched Dandelion Clocks, a retro 1950s flower pattern by the contemporary designer Fiona Howard. It is now the company’s bestselling design.

“It made people see us differently and it proved we didn’t need to be limited by our history,” says David Walker, sales director, who has worked at Sanderson for 26 years. In 2010, the company produced Vintage Fabrics, an eclectic collection of prints inspired by designs from its vast archive, to celebrate its 150th anniversary. The collection is also a bestseller.

Its success prompted Sanderson to revisit the archive and in 2011 it launched Sanderson 50s, a collection of retro-style prints inspired by postwar textile designers such as Lucienne Day and Jacqueline Groag, who created patterns for the Festival of Britain exhibition in 1951. The collection came out at the right time: nostalgic style — mid-century modern Scandinavian and atomic-era chic — had become huge. The latest Sainsbury’s television advert features Wrappings wallpaper from the collection.

But it has not been all roses. The company, which is now owned by Walker Greenbank, went through a “tumultuous” time in the mid-2000s.

Sales have grown year on year over the past five years. For the year to January 2012 they rose by 8.2 per cent to £19 million, including William Morris & Co, which Sanderson has owned since 1940 .

International sales have contributed greatly to that success, accounting for 40 per cent of overall sales. Sanderson is aiming to expand its business abroad and tap into new markets such as Brazil and China. “It is in these markets that we see future growth,” says Keane.

The company began life as an importer of luxury French wallpapers then, in 1869, started producing its own. Patterns were block-printed by hand at its factory in Chiswick. In 1919 it started producing its own range of fabrics at a factory in Uxbridge. The company started to create modern designs during the 1950s. The Palladio architectural collection was launched in 1955. In 1960 it opened a state-of-the-art showroom on Berners Street (the Grade II* listed building is now the Sanderson Hotel) off Oxford Street. It launched the first Triad collection — two wallpapers and fabric — at about the same time. This was the first time a co-ordinated package was produced for home decoration. Now its wallpapers, printed by Anstey, also owned by Walter Greenbank, and many fabrics are made in the UK.

The Sanderson archive features one of the largest wallpaper collections in the UK (alongside those of the V& A Museum in London and the Whitworth Art Gallery in Manchester). “It is a history of the art of decoration,” says Keane. Liz Cann, the company’s design director, adds: “We use the archive constantly. It is very precious and a big selling point for us.”

I visited the Sanderson head office in Denham, Buckinghamshire, this month and was given a tour of the archive. It is a treasure trove of fascinating fabrics, stored in cabinets in a temperature-controlled room. Keane, who has worked for the company for 17 years, pulled out leather-embossed papers imported from Japan in 1860 and papers from Paul Balin, a French 19th-century wallpaper manufacturer, silk damask fabrics from France, 1920s chintz fabrics and many William Morris & Co wallpapers. The company has even kept log books containing original paint recipes.

When its four in-house designers start collections they take inspiration from the archive. Most of the designs are then hand-painted, which gives Sanderson its specific look.

“When Sanderson first started the designers were fine artists,” says Keane. “Today we employ textile designers, but they still paint the designs first.”

Sanderson has returned to soft florals this year. Its Options 11 collection includes Varese, main picture, a print with pink and purple flowers that have a painterly look. It also features a landscape design, Sussex Downs. Some of the new designs, which are due to launch later this year, have a botanical and tropical look.

“People like quirky design — we are quite surprised about what is popular,” says Rebecca Craig, head of the Sanderson studio.

Sanderson has a busy year ahead. It is exhibiting at the Coronation Festival in July (Sanderson has been royal warrant-holder for 90 years) and its new range is due to be launched in August.

Sanderson is extremely proud of its history as one of England’s most famous interiors brands — just don’t call it traditional.