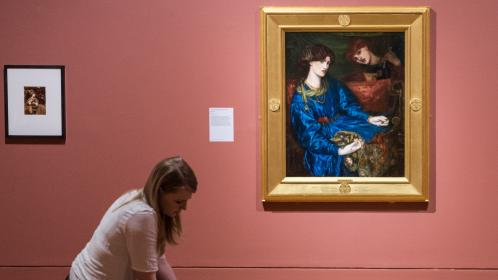 If not precisely misleading, the subtitle of the new Tate Britain exhibition Painting with Light (Art and Photography from the Pre-Raphaelites to the modern age) may lead the visitor to expect a riot of colourful bee-stung beauties and flame-haired stunners, alongside wistful photographs in the same dreamy vein.

There are a number of these, but this is a quieter show than you might expect, at least at first.

We begin more than ten years before the foundation of the Pre-Raphaelite Brotherhood, in Edinburgh, with collaborative photographs by the painter David Octavius Hill and the pioneering photographer Robert Adamson. The more than 2,000 photographs that Hill and Adamson produced together, including landscapes and portraits, are considered an early example of the close relationship, right from the start, between painting and photography (invented in 1839).

Alongside several examples of these, dominating the first room and shown outside Scotland for the first time in almost 150 years, is Hill’s Disruption Portrait, a massive (nearly 12ft) depiction of the rebel assembly that founded the Free Church of Scotland in 1843. In a pioneering move, Hill used photographs as reference for the faces of the 457 people represented. The painting itself is an awkward mass of heads, but it’s quite an achievement.

From here the show gently warms up. Its point, which is often forgotten when looking at art from this period, is that it was being made in parallel with the development of the new medium, allowing for cross-fertilisation and mutual influence.

John Ruskin, celebrated for his topographical watercolours, felt that photography could help students to see a scene differently and find poetry in incidental details. While William Holman Hunt was using white pencil and watercolour to capture the effects of moonlight on fishing boats, Gustave Le Gray was using underexposure and combination printing to achieve a similar effect.

Photography developed as a medium in its own right — the otherworldly work of Julia Margaret Cameron dominates here, but there is also an intriguing 1859 stereoscope by James Robinson, echoing Henry Wallis’s painting (then a sensation) depicting the suicide of Thomas Chatterton, the 18th-century poet. In Two’s Company, Three’s None, the princesses Alexandra and Victoria re-enact Marcus Stone’s painting of the same name, displayed alongside. The photograph has not been shown in Britain before.

Here we see the aesthetic considerations of photographers shifting with those of painters. They move through the fashion for literary and mythical subjects, the late 19th-century urge to convey “authentic” rural life, the obsession with sensuality and atmosphere over clarity (this is where the pictures you were expecting come in, plus a couple of knockout Whistlers) and into the world of colour with the first autochromes. Again, rather predictably, here we find a few controversial (ie, gorgeous and unabashedly sexy) nudes.

It’s a slow burner this show, but it’s worth the wait.