Home > Painting > How to paint like Turner, by Timothy Spall’s art teacher 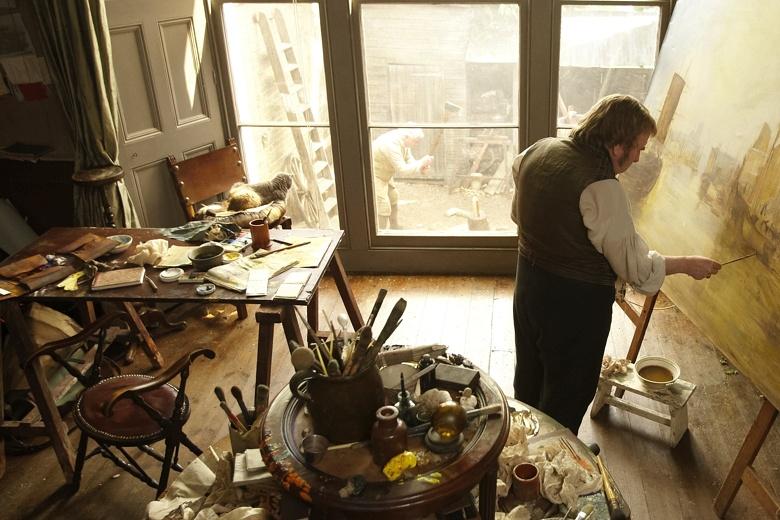 Timothy Spall spent two days every week for two years learning how to pass himself off as the great master; we speak to the tutor who taught him. Click on the video for on-set footage of Spall being helped by Wright, plus an exclusive clip.

In the forthcoming film Mr Turner there is a scene where Joseph Mallord William Turner walks up to his painting in the Royal Academy and spits on it. Top-hatted figures look on, aghast in the way that only top-hatted figures in films can be aghast.

“He’s grandstanding,” says the modern artist Tim Wright, “but Turner did do that. There are all sorts of technical reasons why you might use a bit of spit. Spit is a fixer, it creates an emulsion, can help you get paint to stick on paint . . . ” His list peters out, but you get the idea. Spit is useful stuff.

Wright knows all about spit, and about Turner because he is the man who taught JMW Turner to paint. Or rather he is the man who taught Timothy Spall, who plays Turner in Mike Leigh’s new film, to paint like Turner. A bit. Wright is himself a National Portrait Gallery-exhibited artist, but the sort of softly spoken one who wears his knowledge lightly and a jumper with cat hairs on it and says: “It would be arrogant to suggest I could turn someone into a genius like him.”

Nevertheless, for the past two years Turner, in the guise of Spall, turned up unpaid at Leigh’s request for two days each week at Wright’s concrete and white-walled studio in Clerkenwell, north London . There, from 10am to 5pm with a break for lunch, he learnt how to become like the erratic, revolutionary Turner. Spall, who had previously only done art A-level, was, says Wright, “always on time. Very enthusiastic.”

By the end of the two years, Spall could turn out a pretty good Turner. A copy he did of Turner’s famous Snow Storm — Steam-Boat off a Harbour’s Mouth, while not perfect (“I don’t think we’re in the business of faking Turners”) was, says Wright, pretty good. “As a painting it stands up.” Those paintings you see in the final film are therefore a mixture of ones that have been specially painted by artists, or Turner prints that have been overlaid with a layer of clear paint to give them realistic-looking texture.

Wright’s involvement began when Leigh asked him out of the blue to have a meeting,then “turned up here with Timothy Spall”. The painter hadn’t until then known what to expect because Leigh, who often doesn’t tell actors what will happen to them in his films until it is happening, “wouldn’t say what it was”. While Leigh explained his plan, “I was looking at Tim, and Tim was looking at me and we were mutually thinking: ‘We’ve got to get on; we’ve got to spend all this time together.’ ”

Contemporary critics of Turner would have felt that it was an easy enough task to teach someone to paint like him. In the film there is a scene that shows a music hall sketch, based on a historical one, that suggests that you can create a Turner painting by throwing jam tarts at a canvas. His work was described by some at the time as little more than “eggs and spinach” or “soapsuds and whitewash”. Another critic said: “Turner seems to have taken leave of form altogether.”

Presumably Wright was relieved that Leigh didn’t want to make a film called Mr Canaletto, say, or Mr Hieronymus Bosch? Not so. Painting like Turner is “not all that”, he says, making a swooshy painting gesture with his hand. “If you look at his paintings they are extremely delicate. Everyone thinks he’s just chucking thick paint and he’s not. It’s lots of washes of translucent paint. Turner is a very subtle painter; it’s all veils and mists and vapours. It’s not all show-off expressionism.”

Spall’s lessons in painting like Turner were essentially those that the autodidact artist would have himself gone through but compressed into a two-year course rather than a lifetime. So perspective, colour theory, watercolour painting, oil painting, life painting and, inadvertently, a little bit about taxidermy (mainly: don’t use the taxidermist Wright used. Having bought a rabbit for Spall to paint they realised that it “had been stuffed with the Daily Express. God, it started to stink . . . ”).

So how do you learn to paint like Turner? Unfortunately for Wright, you don’t get much guidance from the man himself. In the film Turner is portrayed as someone who grunts more than he speaks; taciturn to the point of porcine. In real life Turner was, says Wright, not much more forthcoming. “He didn’t say a lot.” What he did say was broad-brush to say the least. “The famous one is: ‘The Sun is God,’ ” which, while it has a certain appealing Turnerish dash to it certainly isn’t as useful as, say, “Take a sharp HB pencil and . . .”

Wright therefore had to look, not to Turner’s words, but to his work to understand how he painted. Much in the way that a da Vinci or a Battista would study the stripped-down layers of a body — skeleton, écorchéd muscles, skin — to understand how to paint it, so Wright looked at the stripped-down sections of unfinished Turners to understand how to paint them: at the underlying skeleton of sketches, then at the overlaid tissue of the washes, then the final flesh and body of the picture. “You see how he’s built up layers and what he’s thinking.”

Pictures are worth, as the saying has it, quite a lot of words. Wright and Spall were allowed into the Tate archives and handled sketches that Turner had drawn when he was 17. “You can see how he holds a pen, how he holds a brush because you can see the mark. It’s intimate.” Not only intimate but informative; from these Wright could almost reverse-engineer not just the drawing technique but the man himself. “You can interpret from a mark what the arm was doing. Once you get that you’re getting an idea about the person.”

In the entirety of the film there are probably, Wright estimates only “ten, fifteen” minutes in which you see Turner actually painting. Did that need two years of lessons? Can you tell the difference between an actor standing in front of an easel and an actor trained as an artist doing the same? “I’d like to think you could,” says Wright. “A lot of films have got very bad painting in them: they use the brush like they’re writing. The point was to get him inside the head of an artist so he behaved like one on screen. I think it’s something to do with Tim’s ease in his studio.” He looks faintly amused. “It’s a subtle point, isn’t it?”

So then, how do you paint like Turner? Wright’s advice is not much more precise than Turner’s. It isn’t, he says, about using a special method of drawing (“There is no technical secret about it”) or using special paints (“it could be a Biro”) but instead about how you look at things. “The secret,” says Wright, “is learning how to see. Turner observed the natural world; most of us just scan it.”

To that end, if you want to learn how to paint like Turner Wright’s advice is nothing to do with paints or paper or technique. Instead he suggests that you “get yourself a dead rabbit”, adding, like a cookery writer conceding that you can substitute sour cream for crème fraîche, “or a dead mouse”.

The next step is positioning it. “Don’t just put it on a table because you will be careless about looking at it. Hang it from a nail on the wall by a string. Stand back six feet. Have a good look at it. Don’t take what you’re looking at for granted.” And to avoid the problems they had with the rabbit — which, though it had a certain Georgian vérité to it, was also quite gross — remember to take it down when you’re done.

It wasn’t just Spall who came to his studio to learn how to paint for the film. Leigh sent all the artists he cast along to Wright. His studio became a sort of Valhalla of Victorian art with Turner’s great friend Clarkson Stanfield, Pickersgill and even Constable down there. Constable was apparently “great. Very good at drawing.” Even Leigh himself came along. He was “a very careful draughtsman. Quite meticulous.” He painted not with a dramatic sweep but, says Wright, with “accretions of detail”. Which, once you’ve seen the film Turner, makes pleasing sense.

Despite some initial trepidation at taking on such an odd project, Wright and Spall “got on very well”. Does Wright think that the Turner who Spall created was a convincing one? “I had a very strange experience once,” he says. “We were having lunch and I looked up at him and he looked just like this portrait of Turner. He sort of transformed . . . I said to Mike the next time I saw him,‘This strange thing happened . . .’ and Mike said: ‘Yeah, yeah. That’s what’s called acting’.”

Butchery Daniel Day-Lewis for Gangs of New York (2002)
Day-Lewis had previously got his hands bloody spending three years learning how to box for The Boxer (his trainer Barry McGuigan, the former world featherweight champion, said he was good enough to go professional). For his role as a cleaver-wielding gang leader in Scorsese’s 19th-century drama he learnt butchery — and how to seem more than a little sinister: he reportedly sharpened his knives between takes.

Horseriding
Tobey Maguire for Seabiscuit (2003)
A stern diet, an equicizer (which, if it has yet to appear in your local gym, is a mechanical horse) and a former champion jockey were all needed to get Maguire into shape for his role as Depression-era jockey. Not to mention a bit of old-fashioned grit and determination: after his first gallop he was shocked to find that his “legs were noodles. I could barely stand up”

Ballet Natalie Portman for Black Swan (2010) It was less the twinkling of the toes than the jutting of the collar-bones that impressed in Portman’s portrayal of a New York ballet girl, for which she trained for five hours a day, seven days a week — and lost around 20lb. She also gained a partner: she met her future husband, dancer and choreographer Benjamin Millepied, on set.

Motor racing Daniel Brühl for Rush (2013) To get into the role of Formula One ace Niki Lauda, Brühl not only did a Formula Three course but also some unintentional method acting when a wheel of his fake Ferrari came off. “I thought, did they do it on purpose, so I could get better into the Niki part?”