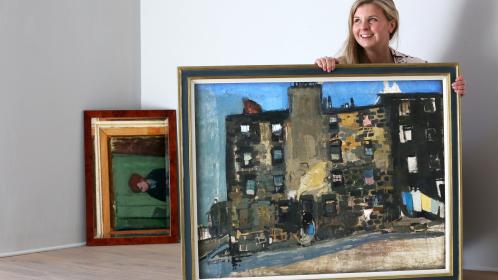 For more than 50 years he has hidden in secret with his red hair burning bright (Will Humphries writes).

Now a small boy painted by one of Scotland’s most acclaimed artists has been revealed for the first time on the back of a canvas.

The painting of the Glasgow youngster was almost completed by the artist Joan Eardley in the 1950s before she gave up on it, flipped the canvas over and painted his tenement block instead.

The oil painting Glasgow Tenements, Blue Sky, 1954 hung privately in the home of Eardley’s sister until her death a few years ago. It is only after coming up for sale at the Scottish Gallery in Edinburgh that it has been publicly revealed to harbour a secret artwork.

Eardley, one of Britain’s greatest postwar artists, is renowned for her portraiture of street children and landscapes of the village of Catterline on the northeast coast of Scotland.

The gallery believes that the boy in the hidden portrait is Andrew Samson, aged 12, part of a large family who lived near Eardley’s studio in the poverty-stricken area of Townhead.

“She has got the head nice but has obviously given up from the knees down, “says Christina Jansen, managing director of the gallery on Dundas Street. “It has been a family picture so they have been aware of his existence on the back.

“Occasionally other pictures have been found behind a canvas. When she [Eardley] was in Catterline she used some of her pictures as insulation in the roof of her cottage, so when she sold that house people found the paintings.”

The Scottish Gallery is exhibiting 23 works by Eardley throughout February. The exhibition, which complements the retrospective at the National Galleries of Scotland, has some paintings which have never been seen in public before.

Many have been in the Eardley family since her death in 1963, and include rare paintings from her travels in Italy in the late 1940s.

The double-sided tenement painting has already sold for £115,000.