Home > Macramé > Say farewell to mid-century style, the 1970s are back 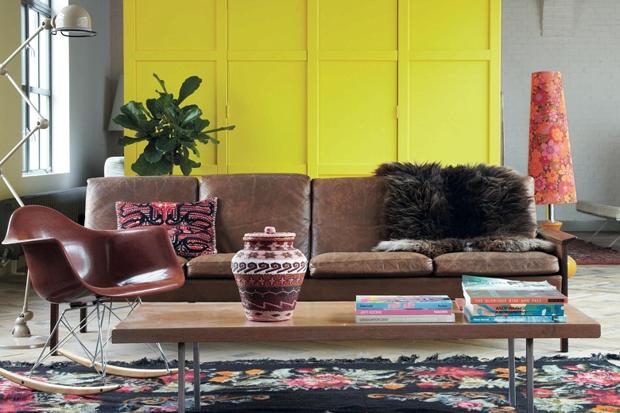 You may want to sit down before you carry on reading this piece. Ready? Here goes: macramé is back in fashion. There are now pages on Pinterest dedicated to the knotted form of textile, the super cool Ace Hotel chain features macramé wall hangings and Livingetc is starting to write about it.

So it’s official – and its popularity is likely to receive a further boost with the recent publication of Bohemian Modern, a new book by the interiors stylist Emily Henson, who works for Ikea and the cult fashion shop Anthropologie. The Bohemian Modern look is a 21st-century take on the 1970s home, hence the macramé, accompanied by lots of house plants, cane chairs – ideally hanging from the ceiling – thick Moroccan carpets and bold patterned textiles.

“It’s not exactly the same thing as it was in the 1970s,” Henson says. “It’s mainly about creativity and individuality – about making up your own rules.”

Henson got the idea for the book when she was in Los Angeles shooting pictures for her first book, Modern Rustic – showcasing an earthy interiors aesthetic of exposed stone, timber-clad walls, natural materials and muted colours. She noticed a re-emergence of the 1970s look in a number of homes in LA. Of macramé, Henson writes in the introduction to the book, “I kid you not, everywhere I looked people were doing it . . . the 1970s were making a comeback.”

She travelled through Europe, Morocco and the US finding more modern bohemian homes to showcase in the book, ones with lots of pattern and colour, bold use of textiles and modern elements such as concrete floors (often created by using modern techniques and equipment such as a concrete power float) and open-plan living spaces. “I know people are crazy for mid-century design and other eras, but I like to mix it up,” she says.

Gratifyingly, you don’t have to be rich to have a modern bohemian home. In the chapter Creativity before Consumption, the featured home owners rely heavily on upcycled furniture. However, this isn’t upcycling in the usual sense – which is to find an old chair and repaint it – but “using materials in unexpected ways”, explains Henson, whose thrifty mother owned an antiques shop. She gives the example of a Dutch furniture design office where a huge desk has been created using black painted bricks stacked on top of each other as the base and a piece of wood as the table top. “This chapter is about saving money,” writes Henson. “However, perhaps more importantly, it is also about originality, because the payoff for being creative is that you often end up with something truly unique.”
Bohemian Modern, published by Ryland Peters & Small, is available for 19.99

Hippy chic
Textiles play a large part in a bohemian modern home – whether colourful or more muted. Colour and pattern are important and they don’t have to be all bright with Henson advising starting with white or off-white walls and adding colour through cushions, rugs and tiling.
Contrast: “It’s about mixing the true 1970s-inspired ideas with modern elements,” says Henson. “You can put a beautiful Moroccan rug on a polished concrete floor, for example.” Create interest in the home by balancing hard versus soft, old versus new, pattern versus plain.
Green living: add indoor plants to your home, with terracotta pots sitting on the floor or hanging from a brightly coloured macramé plant hanger (which you can buy on Etse, as well as macramé wall hangings).
Complete the vibe with a cane chair hanging from the ceiling, scattered with lots of patterned cushions.