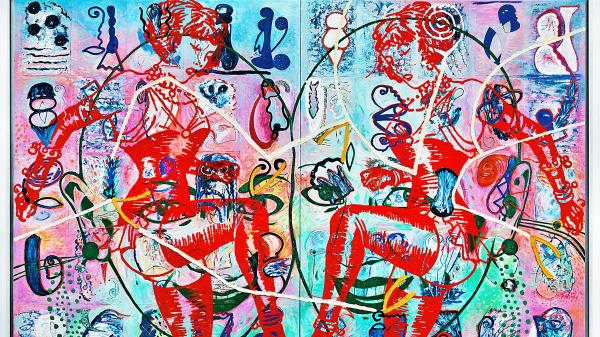 The Royal Academy’s Summer Exhibition feels fresh, and that’s quite a feat. Having languished as an often-ridiculed bastion of the reactionary, it has recently begun to show work that feels more current, more audacious and, for the spectator, more invigorating.

This year, co-ordinated by the sculptor Richard Wilson, Summer Exhibition puts its focus on collaborative teams. The creations of artistic duos — from a flashing neon script by Tim Noble and Sue Webster to Allora and Calzadilla’s stone-carved petrol pump which emerges, like Michelangelo’s Dying Slave, from its rough matrix — dominate this introductory display. Wilson encourages the spectator to consider the artwork perhaps less as a discrete object than as part of an increasingly complex dialogue.

This idea of interaction is continued throughout the show, not simply in the collaborations — most strikingly in the case of Zatorski + Zatorski who, alluding to the academic tradition of life-drawing, scatter charcoaled human bones across an expanse of white paper — but in the exhibition’s hang. Sometimes works reflect one another directly. David Nash’s towering wall of burnt redwood tree — winner of the Charles Wollaston award for the most distinguished work in the show — rises above two similar pieces: a lumpen bronze study for an embryonic odalisque by William Tucker and a piece in which David Mach drives a steel armour-plating of screws into a lump of wood.

At other times contrasts are stressed. Gilbert and George’s vast bright image of themselves looking out at the viewer from between parted legs could hardly be more different from Ellsworth Kelly’s fluid line drawings of flowers. Yet they both share a graphic influence.

Tradition is well represented. You will still find plenty of landscapes, still lives and pet cats, but you will also find the Chapman brothers’ gruesomely gory latest piece. It is left to the viewer to make sense of the puzzle.