Home > Arts > The fine art of staying in the picture 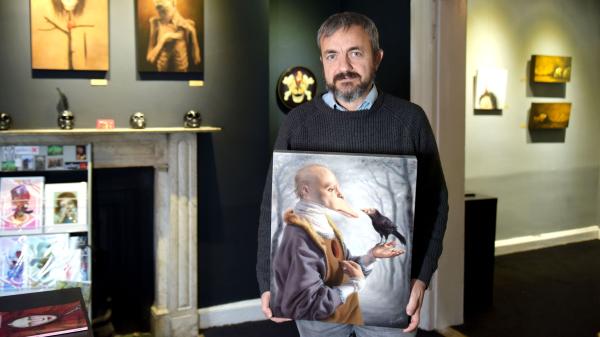 To fulfil her lifelong ambition to open an art gallery in her native Co Mayo, Rosemarie Noone returned to Ireland in 2007. But within 18 months her dream had turned sour as the economy collapsed, threatening to take her gallery in Claremorris with it. She had swapped a fast-paced career as a corporate fundraiser at the San Francisco Museum of Modern Art for the relative isolation of a west of Ireland town with a population of less than 4,000. As she gazed at the grey, rain-spattered streets outside her minimalist “space”, she wondered if she had done the right thing.

“I gained a lot of experience abroad and felt I could come home to either work in the non-profit sector or to be my own boss,” says the 37-year-old, a specialist in contemporary Irish and American artists. “I opted for the latter.”

She adds: “There seemed so many possibilities at the beginning. The market in Ireland was on fire. Strange as it may sound, Claremorris has a long-standing association with the visual arts. I had grown up with art; My mother had been a collector. I grew up as a toddler running around these exhibitions. I didn’t strike me as strange to see a Louis le Brocquy portrait as a child.”

At her first show, in October 2007, Noone sold €60,000 worth of art. Then the recession hit. “I was putting on shows and selling nothing. Soon I was offering extended payment plans to younger buyers, whereby they would pay just €50 a month — whatever it took to keep the show on the road. It was extremely challenging.”

Noone’s experience is far from unique. The Irish art scene is modest, and gallery owners have to innovate to stay in business. It has to be more calling than job. That’s particularly the case for those off the beaten path, whether geographically — in the case of Noone — or in terms of the artwork displayed.

“My gallery isn’t my first job and I can devote only part of my time to it,” says Giovanni Giusti, an Italian who in December 2014 opened GalleryX, devoted to the “fantastical, the sensual and the macabre”, at South William Street in central Dublin. The capital’s genteel scene had not seen anything quite like GalleryX’s collection of often skimpily attired devils and demons, and Giusti initially struggled to attract both artists and buyers.

“I had first come to Dublin due to a bizarre combination of events,” says the 50-year-old native of Florence. “It was in the 1980s and my lecturer in Italy suggested I study old Irish. I was studying writing systems and my professor wanted me to investigate ogham stones and ogham writing. At the time, I hadn’t even heard of ogham.”

Giusti ended up moving here full time, but says he was struck by the conservatism of the Irish scene and its unwillingness, as he saw it, to cater to more outré tastes. Having already established a successful language translation business, two years ago he took a chance with GalleryX .

“I would check out various exhibitions. There was always something missing. After a while I thought, ‘Well, maybe I can do this myself and share my passion.’

“At the start it was hard to get artists to even show. Now I have to say no to people I really like because I don’t have the space or the time.”

His clientele does not feature the traditional megabucks collectors. The buyers include heavy metal fans, tattoo aficionados, students of macabre literature — anyone with a taste for the dark and the daring. “ I feature stuff that is accessible but not boring,” he says. “It isn’t cryptic or intellectualised. It’s not about the artist — it’s about the art.”

The exhibitions veer from quirky and titillating to shocking. In October, GalleryX showed Cyril Helnwein’s Beautiful Disasters, “a potent mixture of satire, naked women and irreverent humour”. St Stephen’s Green on a Sunday morning this isn’t.

“It has happened once or twice that people come in and are a little surprised by what they see,” adds Giusti. “Such occasions are rare. We are a little off the beaten trail and you have to seek us out. If you are interested enough to actually visit, you probably have an idea of what is in store. Nobody has been incredibly shocked or outraged.”

If maintaining a gallery is a challenge in the middle of Dublin, it is even more of a struggle in misty west Cork, where Barbadian native Annabel Langrish set up in 2004. The Heron Gallery is located at Ahakista on the remote Sheepshead peninsula, where Annabel, 60, and her husband and business manager Klaus must go out of their way to attract patrons.

Operating an adjoining cafe has helped, as has the support of local celebrities such as the BBC television presenter Graham Norton and the film producer David Puttnam, who have hosted openings at the gallery. Langrish’s ultimate ambition is to have the movie star Jeremy Irons, another A-list west Cork resident, around for a ribbon-cutting.

“When I first opened, it was a big mystery in the locality,” she recalls. “We were putting up the sign and people would walk past wondering aloud as to what I was doing exactly. Later they were quite pleased to have a gallery. Graham Norton’s holiday home is at the bottom of the hill, and he opens a lot of exhibitions for us. If we have a charity auction, he will pop around.”

Annabel generally exhibits her own paintings and prints and, in an attempt to reach a wider market, has also opened galleries at Schull and Kinsale, both popular tourism destinations in west Cork. She finds the isolation at Ahakista deeply inspiring, while the locals remind her of the community in the Caribbean where she grew up.

“The people are incredibly friendly here and have a casual way that reminds me of Barbados. They are kind and laid-back. Both places are by the sea, too. That was my main reason for moving to Ahakista; I previously lived in Roscommon. I went to Ahakista to be closer to the sea, which has always been an inspiration. I don’t mind being isolated, so long as you can get away from it every now and then.

“Ahakista is incredibly quiet and, unfortunately, we are not on [the busy tourist trail] the Wild Atlantic Way. That was a big reason for the cafe — to bring people in. Passers-by will often stumble upon us and are intrigued.”

Pulling in punters is a challenge that Noone also faces on a daily basis. As sales flatlined, she considered “dumbing down” and flogging bland watercolours. It was not what she had ever imagined doing with her life, yet if it saved the gallery it was a possibility she had to consider. She ultimately discounted the option and, through hard work and imagination, has kept her dream alive.

“In the end, I came to the realisation that if I was rolling out the chocolate-box Sunday painters, I might as well be selling pots and pans. There is nothing wrong with pots and pans. However, it wasn’t what I wanted to do.

“Most of my customers are not from Claremorris. I have to be a bit of a Del Boy. I had a van for years which I’ve only just got rid of — I would go around with a boot full of paintings, visiting people. A lot of gallery owners don’t have to do that. I’ve stuck with it and, if the rewards aren’t always financial, there is still an immense amount of satisfaction.”