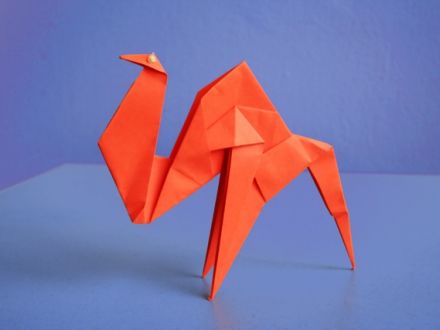 Florence Temko was one of the most prolific authors of origami books in the English language and renowned as an expert origami teacher. She wrote her first craft book in 1962; a further 70 or so followed.

Florence Maria Marx was born in Wembley, northwest London, in 1921, to Erich Marx, an engineer, and his wife Erna. There was an elder brother, Theo. Florence was educated at Wycombe Abbey School and at St George’s Business College. She also attended the London School of Economics.

Her first job was at Romford, Essex, working for Roneo, the duplicating manufacturers. Later she worked in the purchasing department of Selection Trust, a company that had interests in copper and diamond mines in South Africa. During the war she served as an air raid warden in Wembley and on one occasion returned to her home to find that several houses in her street had been hit. She was relieved to find her parents’ home undamaged. Another time a 5-inch chunk of metal from an anti-aircraft shell missed hitting her by only 3ft. She kept the shrapnel as a souvenir.

While on a weekend break to Brighton she met Leonard Temko, ten years her senior, who was a US Army sergeant. He was stationed at Bushy Park and was in charge of the communications room that ran teletype between SHAEF (Supreme Headquaters Allied Expeditionary Force) and Washington. The couple became engaged and were married in London just after the war. Florence travelled to the US on the Italian liner SS Vulcania — one of several ships that carried more than 12,000 GI brides to a new life in America. She arrived at her new home in Montclair, New Jersey, in March 1946. After leaving the army Leonard started his own electronics business and the couple had three children.

In 1948 Leonard fell ill and needed hospital treatment at a spa in Clinton Falls in upstate New York. While visiting him Florence met Lillian Kruskal, whose husband Joseph was in the same hospital. Lillian, at 49, was almost twice her age but the women found that they both enjoyed crafts and shared other interests. They spent many hours together in the occupational therapy department learning to make woolly animals. After their husbands returned home they kept in touch and met regularly. They decided to try to sell some of the soft toys that they had made and were successful in persuading several shops in New York to stock them. Florence would travel from New Jersey over to Lillian’s apartment in New York every Monday to help to deliver the merchandise. The enterprise ended in 1950 after Joseph Kruskal died and Florence had given birth to twins.

In 1956 Florence met Lillian for lunch at the Russian Tea Room in Manhattan and Lillian taught her how to make a simple origami house that she had just learnt from the recently published book Paper Magic by Robert Harbin. Temko later wrote: “I was hooked and thus began my love for origami.” She quickly acquired her own copy of the book. An article about Kruskal appeared in The New York Times in June 1958 and she was interviewed about origami on television. As a result, people demanded to be taught origami and an instruction group was formed. This eventually became the Origami Centre of New York and in more recent years evolved to become an international organisation, Origami USA.

Temko was present at the group’s first meeting in October 1958 and became a regular attender. In that year she presented her first series of origami classes at the Old Mill Art Association in Tinton Falls, New Jersey. She expected only about half a dozen people but nearly 100 turned up. She was soon in even greater demand and and found herself giving frequent lessons to schools and women’s groups.

In 1961 she contracted hepatitis after eating infected mussels and was bedridden for six months. During this time she folded all the models in Paper Magic and those from another Japanese origami book. She also started creating her own simple designs. After recovering she resumed giving demonstrations in schools and clubs. She sometimes taught to groups as large as 200 at a time.People often asked her for instructions so that they could remake the models at home. In the days before photocopying, computers and the internet she decided that the answer would be to write her own book. A book proposal including ten origami models was turned down by about 30 New York publishers but one, Platt & Munk, well known for children’s books, phoned to ask if she could write a book on paper cutting as the author previously commissioned had dropped out. Temko seized the opportunity.

This first book, published in 1962, was called Kirigami — the Creative Art of Papercutting. The diagrams were done by a professional artist Joan Stoliar and the 16-page book was sold in a box with sheets of origami paper. The book sold 600,000 copies. This was the first English language book to use the word kirigami although the word had been used in Japan for a long time. In the book, the author was described: “As a lecturer, she has introduced Origami, the art of paperfolding and Kirigami, the creative art of paper cutting to tens of thousands of Americans, of all ages — schoolchildren and adults”.

During most of the 1960s Temko worked as a travel agent, which enabled her to travel at discounted fares. In 1964 she participated in a special travel agents’ tour to Japan, Hong Kong, Taiwan, Bangkok and Singapore. While in Tokyo she was able to meet the world-famous origami artist Akira Yoshizawa, who is credited as having turned a simple children’s hobby into a true art form. Her visit with Yoshizawa was reported in the Asahi Shimbum, Tokyo’s premier newspaper. She also met two other well-known Japanese origami artists, Toyoaki Kawai and Kosho Uchiyama. The following year Kawai led a group of 30 Japanese paperfolders who demonstrated origami at the New York World Fair. Temko entertained them at a party at her home in New Jersey.

Her first TV appearance was in the UK in the early 1960s when she made an appearance on ITV demonstrating a simple origami box to her 12-year-old niece Caroline. In the US she made guest appearances doing origami on The Steve Allen Show and also on many other shows shown nationwide. In the 1970s she did a fortnightly origami slot for about a year for a morning programme originating from Albany, New York. She wrote that she once brought a whole production to a halt after she had set up some origami models on a demonstration table herself. This was apparently the job of a union employee but it was eventually settled and the show continued.

In 1966 Florence’s first origami book Party Fun With Origami was published by Platt & Munk. She also had two more origami books published in 1968 – Paperfolding to Begin With and Paperfolding Made Easy. She attended the first ever convention of the British Origami Society in London in 1968. She then moved to live in New York and devoted herself full time to origami and writing books.

In 1982 she moived to San Diego, California, and lacking storage space she decided to donate most of her large collection of over 500 origami and craft books to the Mingei International Museum of world folk arts at San Diego. Temko became an origami consultant to the museum and in 2003 helped organise the Origami Masterworks Exhibition there. This was one of the most impressive origami exhibitions seen in the US, with almost 200 models folded by 42 of the world’s leading origami artists. An official DVD was made of the exhibition and temko assisted with the commentary. In recognition of her lifetime commitment to Origami, the official exhibition book was dedicated to her with the preface: “Florence Temko — for whom the art of paperfolding is a joy to share.”

Also in 2003 Origami USA created the Florence Temko Award in recognition of the work that she had done in promoting and teaching origami. This is awarded annually to an accomplished folder but has never been involved in any organised origami groups. The award pays for the cost of the recipient to attend the annual Origami USA convention in New York.

Temko was a frequent visitor to England, usually combining her trips with stopovers in other countries to visit fellow folders. Over a period of 40 years she accumulated a large collection of almost 2000 origami models folded by the original creator. These filled five filing cabinets. In 2007 she donated her model collection to Origami USA which are noiw being photographed and catalogued.

Temko preferred simple origami models and her books mostly contain easy examples aimed at beginners and suitable for teaching to large groups. It is estimated that her books have sold close to three million copies to date. She created about 250 of her own origami designs.

Wendy Zeichner, president of Origami USA, recently wrote a tribute in which she said: “She was there in the very beginning writing the books that brought so many of us to folding. It is the end of an era, but the legacy of Florence Temko will live forever.”

Her marriage to Leonard ended in divorce in 1968. Her second husband, Henry Petzal, whom she married in 1969, died in 2001. She is survived by her brother Theo and her three children.